Psalms 71:21 ‘you shall increase my greatness and comfort me on every side’

Psalms 138:8 ‘the Lord will perfect that which concerns me…’

There are limits that we have to contend with in our lives. Some of those limits we have put upon ourselves. I believe God wants me to say to you that you need to break the limits this year. We need to look at how to expand our horizon, we need to realize that we cannot continue to be on the same spot, within the same sphere of influence, just managing what we have had.

Proverbs 4:18 –the path of the righteous is as the shining light, that shines brighter and brighter unto the perfect day… the concept here is that there is always more to be received with God. God cannot be exhausted.

I find something in 2 Samuel 12 interesting. When David took another man’s wife, God sent a prophet to him and God said, ‘I took you from nowhere and I made you king; you were not in the lineage of kings, you were a shepherd boy and even in your family you were not reckoned with because when they wanted to anoint one of your father’s sons, your father didn’t bring you out’. God said, ‘I took you from the back side of desert with the sheep and made you king’.  In 2 Samuel 12:8, God said, ‘I gave you your master’s position and all that he owned, and even if it was not enough, I would have given you more’. God can give you more, so stop thinking that you have reached the limit. No! God is completely inexhaustible.

HOW TO BREAK THE LIMITS

1.You must really trust God –the key word is here is ‘REALLY’. Gen 15:1 “After these things the word of the Lord came to Abram in a vision, saying, “Do not be afraid, Abram. I am your shield, your exceeding great reward.” If God went the extra mile to say ‘I am your exceedingly great reward, then God means business –why did God say these things to Abraham? It was because Abraham demonstrated trust in God as expressed in his lifestyle, actions, and words. He had just separated from Lot and allowed Lot to choose his allocation first, knowing that God was his (Abraham’s) source. He had also just refused spoils of battle saying that he didn’t want anyone to be able to claim he made him (Abraham) rich’.

You don’t need to struggle for promotions and positions because if you know who is blessing you, you will know that promotions doesn’t come from anywhere except from God; he is the one who lifts one up and put another down. Psalm 75:7. You really need to trust God this year.

2.You need to improve yourself – ask yourself why Jacob made it to the palace – he developed proficiency in the interpretation of dreams, wisdom, and even administrative skills as he worked for Potiphar and in the prisons.

David made it to the palace also because he was skillful in playing harp (and God was with him) 1Sam 16:14-23. He also was a trained warrior having killed lions and bears.

Daniel and his friends were promoted because they found them ten times smarter than the astrologers they had –Daniel 1:20. Daniel was also described as having a spirit of excellence.

David had a problem with women- the bible records that when he was made king and took the throne, one of his first acts was to take more wives and concubines (2 Samuel 5:12-13). Then came Bathsheba…

Judas had a problem with money- it had started long before he was offered 30 pieces of silver to betray Jesus. He was the one who kept the money bag and he constantly helped himself (John 12:6). Eventually, his uncontrolled desire for money was what made him loose the seat as an apostle

Moses’ consistent problem with anger stopped him from entering the promise land.

3.Maximize relationships around you – God does not deal with lone rangers. Prov 18:1 says, ‘the man who isolates himself rages against all wise judgment’ while Psalm 68:6 says, ‘God takes the solitary/lonely and put them in families’. Everyone needs people. There are people around you for a reason so ask yourself how you can best maximize your relationship with the people that God has put in your life. Jesus needed the disciples – they handled logistics for the ministry and were able to ensure widespread impact and continuity.

4.Help others – Gal 6:1-2 ‘if a man be overtaken in a fault, ye which are spiritual, restore such an one in the spirit of meekness; considering thyself, lest thou also be tempted. Bear one another’s burdens, and so fulfil the law of Christ.’

‘Do good wherever you go. After a while, the good you do will come back to you’. Ecclesiastes 11:1 (ERV)

Everything in life is about sowing seeds (Gal 6:7). Everything a man does is seed and he will harvest it. Matt 5:7 tells us that when we are merciful to people, you will also reap mercy.

Previous Post STEPPING OUT OF THE BOAT – Rev. M Oladoyin Odubanjo
Next Post WHAT IS TRUE ROMANTIC LOVE? With Pastor Tokunboh Odubanjo 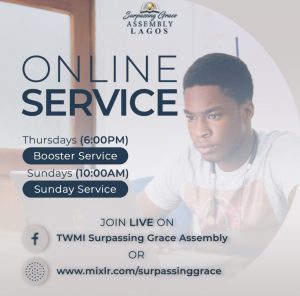